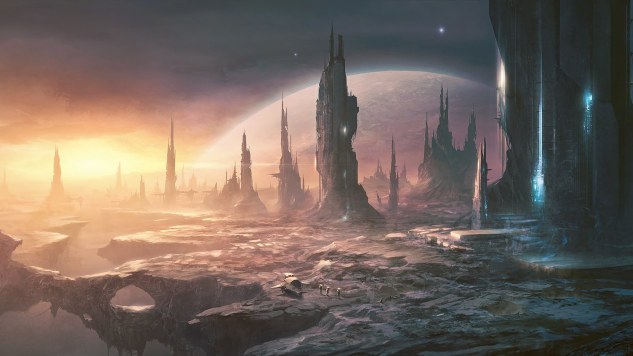 Up until a few days ago, I had never played a grand strategy game. I’d heard of Sid Meier’s Civilization, Total War, Europa Universalis and others, but I’d never really paid attention to them. As far as I was concerned they were games I would never play, my lack of a capable PC allowing me to forget all about them. When I was asked to go to a two day multiplayer event to play one of these games, you can then imagine my trepidation. Stellaris, the 4X grand space strategy title that I’d be playing, sounded complicated. My research also told me that Paradox, the developers behind it, were renowned for making particularity complex strategy games. Safe to say, I was scared. However, I’m not one to shy away from a challenge, so I agreed to travel to the event, for better or worse.

As soon as I arrived, I felt out of my depth. Standing outside, I joined a conversation with some fellow journalists, their talk of strategy games going completely over my head. I didn’t know what they were talking about and I was now more afraid than ever of what I might find in the room opposite me. Despite my reservations, I sat down at a PC, listened to a short presentation, and then we were told to start the game. Before getting into the action, we had to customize our empire, deciding things such as its name, what race our people would be and defining our government and ethics. I decided to make a xenophobic human race who had direct democracy, which meant every five years there would be an election. My empire name: Death To All But Metal. (Thank you, Steel Panther.) As the day went on, my name became less and less fitting—Death To No One But Myself would sound more accurate.

On the first day, Paradox told us that attacking each other was forbidden and so the room entered into a non-aggression pact. This allowed us to come to grips with how to play the game and give us an opportunity to build up our empires. The goal of Stellaris, in its most basic form, is to expand your empire and become the strongest and biggest one within your allocated solar system. In order to do this, you have to explore planets beyond yours using science ships, you have to inhabit other worlds and you have to maintain a healthy income of resources in order to build andUPGRADE

your empire. This is just a tiny portion of the things you have to do and think about, though. Strategy game newbies like myself will probably take their first look at the game, even just the starting menus, and think Stellaris looks terrifying. However, help is at hand in the form of very useful tutorials.

Showing up on the right hand side of the screen, these tutorials were a life saver to me throughout my time with Stellaris. They taught we how to make new ships, how to mine for resources on other planets and how to recruit people, such as Scientists, in order to make things like research run smoothly. Without the tutorials, I would have been lost. And smart, careful placement on the screen meant they were never too intrusive or annoying. I also found the hints very useful, things such as hovering over resources icons giving you extra guidance. Just because it’s helpful doesn’t mean Stellaris pampered me, though. It didn’t hold my hand but it didn’t feel like it was throwing me in the deep end either. Instead the tutorials just guided me to where I should be, and learning how the game works for myself seems like a large part of what Paradox is aiming for.

These tutorials were useful, but I found a better to way to learn: by pissing my empire up the wall. 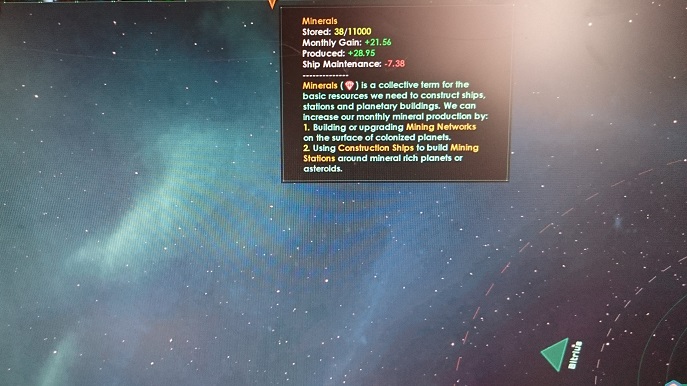 After we’d had lunch, I looked over my small, but functioning empire. I’d played about 2 hours at this point and I was relatively happy with my progress. Martin Anward, the AI Lead at Paradox, even came over while I was waiting to restart and said I was doing well, his excitement upon seeing my Gala World being completely lost on me. Once we returned to the game, however, I got cocky. I decided the best thing to do would be to start a war with a neighbouring empire, the Bakuturian Sovereignty, who were much more powerful and bigger than me. It was a mistake. To wage my unwinnable war, I had to communicate with them. To do this, you click on the emblem of your chosen empire or you can select them via the Government tab on your top left. Early on I had declared them as my rival, which I did to gain influence points. These are currency that you can use to build frontier outposts, their purpose being to extend how much of the solar system you can build and settle on. Influence points make up a third of your main resources, and while they aren’t as useful or important as energy and minerals, they are vital to expanding your empire.

As they were already my rivals, the Bakuturian Sovereignty weren’t too keen on me anyway, my xenophobic stance on alien relations not helping the matter. Clicking on the communicate button, I saw that I could exchange resources with them, set up an embassy in their territory and demand they become my vassal. This is basically where you make another empire your pet, them operating semi-independently but without a say in foreign policy, who they wage war with and with no way to stop you from taking a cut of their resources. They said “no” so I said “go to hell” and waged war. I thought I was safe: I’d developed a 800 attack fleet after all, an attack number that I now know to be laughably flimsy. I had to learn this the hard way. It was over in about ten minutes. They sent in two thousand enemy ships to attack my fleet, nearly destroying them in the process. Then they went after my stations on my home planet Earth, with my Spaceport, where armies and ships are developed, taking heavy fire, as well as my research and mining stations.

I had to submit before I was wiped out. When I surrendered, they demanded my home planet of Earth and everything on it, including its residents. I gave it to them, making Sirius my new homeland and cowardly leaving my people under the rule of a bunch of evil tyrants. As you can probably tell, I was heavily invested at this point. I learned more from my failed war experience than anything else in those two days; seeing how not to play Stellaris allowed me to learn how to properly play it. Much else happened through the rest of the day: I joined an Alliance with The Merrymen, who were controlled by a fellow room dweller. She dragged me into a war, but it was thankfully mostly fought in her territory. The Shell, a rapidly expanding empire next to me who were ran by a Polish YouTuber, asked me to leave The Merrymen Alliance and join one with him. I accepted considering his vast size and my depleted nation. I also started noticing people leaving their seats and walking towards other players. Then I remembered: tomorrow the non-aggression pact would be over. It would be a free for all and people wanted to make alliances before the chaos. I would stay quiet throughout—my empire had been through enough already. 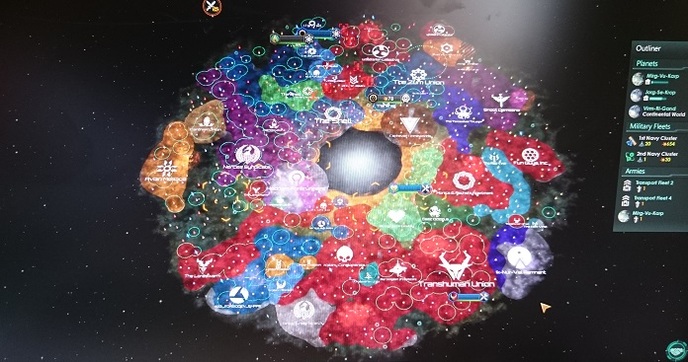 During that evening’s dinner, we were told that the room was actually going to be split up into two alliances. So the next day we all chose a side: The New Space Party or The Possibly Aggression Pact. The New Space Party was led by Martin, the Paradox AI Lead. Naturally, I chose them. After a few hours of preparation and a short break, the war began. I stayed quiet, traversing the map and watching the battles unfold, the exhilaration of it all dragging me in. Watching the little ships destroy each other was wonderful, even more so because I knew I was safe. Call me a coward, but I didn’t feel like being obliterated so early on in the day. Thanks to my lack of partaking, however, the war provided me with a great excuse to explore the game without being interrupted. Delving more into Stellaris’s systems and tabs, I learned a few lessons I could have done with knowing the day before. I learnt that I hadn’t been extracting resources from my own planets, which I started doing by erecting farms and stations within Sirius. I learnt that using the ship design tab is very handy, creating new and more powerful ships leading to a better fleet. I also learned that Stellaris was even more wonderfully complex and intricate than I had thought the previous day. I did not want to part with it.

In the end, The New Space Party were victorious, the game coming to an end a few hours later. When we were told to leave the game, all I wanted to do was steal the computer in front of me and go and start Stellaris all over again. In two days this game managed to transform me from someone who didn’t care about strategy games, to someone who wants to play them all, starting with this one. To some, this might just be another fish in the genre’s ocean, but to me, Stellaris has opened my eyes to a whole new world of videogames. One day I will have a PC that runs it, and when I do, I’ll create the biggest and best empire in the galaxy, no matter how many hours it takes me to do it.